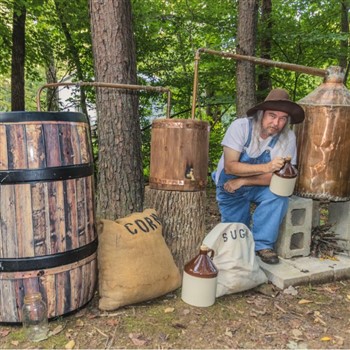 **ALL WOLF TOURS - TIMES AND ITINERARY SUBJECT TO CHANGE**

Travel with Wolf's to Pikeville, Kentucky, for a tour filled with beautiful mountain scenery; music history, legends and performances; and a taste of moonshine with a side of history. Following meal and rest stops en route, you will arrive in Pikeville for check in at the Hampton Inn (606-432-8181) for a three-night stay. The hotel features an indoor pool, fitness center and business center with complimentary Wi-Fi. Guest room amenities include a microwave, mini refrigerator, coffee maker, hairdryer and iron/ironing board. Tonight, you have included dinner and entertainment with a view at the Pikeville Overlook Event Center. Afterwards, you will return to the hotel for the night.

Breakfast is included at the hotel before you board the motorcoach with your local guide and visit two of the most important Hatfield McCoy Feud Sites, the Historic Hog Trial Site and the McCoy Well Site. The mere mention of the names Hatfield and McCoy stirs up visions of a lawless and unrelenting family feud that traverses the border of Kentucky and West Virginia. From romantic entanglements to property disputes, this legendary feud evoked gun-toting vigilantes determined to defend their kinfolk and ignited bitter grudges that would span generations. Your first stop is at the Historic Hog Trial Site. The Hog Trail and stabbing of Ellison Hatfield at this historic cabin sparked several key flare-ups in the feud. In 1878, Randolph McCoy accused Floyd Hatfield of stealing his pig. The trial was held at the cabin with the judge being a Hatfield and the main witness being killed by the McCoys. Additionally, this is the spot where the secret romance of Johnse Hatfield met Roseanna McCoy. This cabin was so significant in the story of the feud that it was completely rebuilt in 2012 on its original foundation. Next, is the McCoy Well Site in Pike County, Kentucky. One of the feud tour's most important sites, the Randall McCoy home place features the well where the family drew water, as well as an outline of where the house once stood before the Hatfields attacked on New Year's Day 1888 and burned it to the ground. An interesting tie-in to this stop is that the McCoy Well also supplies Pauley Hollow Distillery with water for its "Fuel of the Feud" Moonshine. Your final stop before lunch on your own is at the Historic Williamson Coal House. Built in 1933, the Coal House is constructed of 65 tons of Winifred Seam Coal donated for its construction. The Coal House currently serves as the office for the Tug Valley Chamber of Commerce. Take the opportunity to photograph the Coal House and walk inside for valuable information about the area. After time for lunch on your own, you will depart for Kentucky Mist Distillery for a tour and tasting. Kentucky Mist's history can be traced back to days of the American Prohibition when distilling corn liquor and bootlegging in the Appalachian Mountains was a way of life, but illegal by government standards. Henry Holbrook, grandfather to distillery owner Colin Fultz was imprisoned for bootlegging, but that didn't stop him. He began bootlegging again after 17 years in prison and then died in 1986. Colin decided to turn the Holbrook family tradition into a legal business in 2015, thus Kentucky Mist was founded. The distillery produces whiskey, Ole Henry Barreled Corn of course, as well as flavored moonshine made with whole fruit and vodka. Following the tour and tasting, you will travel to Breaks Interstate Park for their Welcome Center and Moonshine Still Tour. Experience the history of moonshining and 1700/1800's farm life with a tour of the old moonshine still and grist mill. In addition, you will have a scenic tour of the Breaks Park, also known as the Grand Canyon of the South, featuring a spectacular view down into the 1600 feet deep canyon that is the largest canyon east of the Mississippi. Dinner this evening will be included while at the Breaks and your evening concludes with a musical performance by the female bluegrass group, Coal Town Dixie. You return to the hotel afterwards.

Wake to breakfast at the hotel before you depart with your local guide to stop first at the US 23 Country Music Highway Museum Tour. The Museum features 14 exhibits displaying memorabilia from the many US 23 country music stars who call Eastern Kentucky their home including Loretta Lynn & Crystal Gale, Chris Stapleton, The Judds, Billy Ray Cyrus and Patty Loveless to name a few. Next, you visit the May Memorial United Methodist Church. Construction of the church began in 1908 and is made of native local sandstone, 12,000 glazed green tiles and is well known for its large stained-glass windows designed by Italian craftsman and imported from Italy. The pipe organ was donated by Andrew Carnegie. The church organist will be on hand to demonstrate the organ sound and how air is pumped from the basement to the chamber of the organ for sound. You will depart for Van Lear where you will have a Coal Miner's lunch at the Coal Miners' Museum. You will also tour the museum that was originally built in 1913. The museum houses coal mining tools, displays showing the community during the coal boom years, Icky's 1950's soda fountain and replicas of the old post office and doctor's office. The Coal Miners' Museum was portrayed in the movie "Coal Miner's Daughter". Next, you will visit the childhood home of Loretta Lynn and Crystal Gale, Butcher Holler. You will arrive at Webb's General Store and in smaller groups be taken to the see Butcher Holler. The home is nestled between two fog shrouded mountains up a "Holler". Webbs General Store is over 100 years old and is still owned by a relative of Loretta Lynn. The Webb store was portrayed in the movies "Coal Miners' Daughter", "Let It Be War" and "Fifth Hollar". Afterwards, you will visit the Mountain Home Place 1850-1875 Living History Farm. Stroll through the property that contains the McKenzie double-pen family cabin, a one-room schoolhouse, a double crib barn and the Old Fish Trap United Baptist Church and scenic views from the gardens and fields. Typically, there are period dressed interpreters that are performing daily chores, giving demonstrations and discussing early farm living (TBD). The Welcome Center features the Museum of Appalachian History and a gift shop with handcrafted items. Dinner this evening is included at the Mountain Home Place. The evening ends at the US 23 Country Music Highway Museum with some good old-fashioned Porch Pickin'. Local artists take the stage every 20 minutes showcasing their southern bluegrass, gospel and country music talents. No drums, not horns, just good ole foot stompin' music! You will then return to the hotel.

Breakfast is included at the hotel before you check out and hit the road for one last stop at the Highlands Museum before heading home. At the Highlands Museum history and heritage along with energy and excitement come together to provide visitors with activities and information that puts the past in perspective and moves the present into the future. Step into a 19th-century classroom and become a student, enter a medical world when late night house calls were made on horseback and paid with chickens, see Hitler's last telephone and more. After some time for self-exploration, you will depart for home with meal and rest stops along the way.