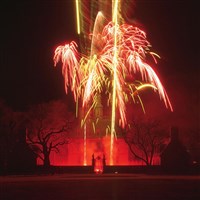 ‘Tis the season to experience the customs of the past, make a lifetime of memories and begin your holiday season with a Colonial Williamsburg Christmas tradition tour this year. You'll enjoy a magical fireworks display during the Grand Illumination, guided walking tour of Colonial Williamsburg, drive through holiday lights display, and a guided house tour "Centuries of Christmas" at Berkeley Plantation.

‘Tis the season to experience the customs of the past, make a lifetime of memories and begin your holiday season with a Colonial Williamsburg Christmas tradition tour this year. You'll enjoy a magical fireworks display during the Grand Illumination, guided walking tour of Colonial Williamsburg, drive through holiday lights display, and a guided house tour "Centuries of Christmas" at Berkeley Plantation.

Following meal and rest stops en route, we will arrive for check-in and enjoy a Holiday reception at the SpringHill Suites, Williamsburg (757-941-3000). During our two-night stay, you may wish to utilize the hotel amenities which include an indoor pool, fitness center, business center, and coin operated laundry facility. In-room features include mini refrigerator, microwave, coffee maker, hairdryer, iron/ironing board, and complimentary internet service. Next, you have dinner included at a local restaurant followed by an illuminating experience at Newport News Park. Sit back and enjoy the Celebration of Lights that will light up your holidays with their award-winning two-mile drive through spectacular animated scenes. View whimsical toys, elegant swans, leaping reindeer, multi-colored snowflakes and scenes from Virginia's past portrayed in a kaleidoscope of dazzling colors. Finally, return to the hotel for the remainder of the night to turn in

A deluxe continental breakfast will be included at the hotel before you depart with your guide for a tour of Colonial Williamsburg including the Governor's Palace and focusing on the holiday decorations from 1699 to 1780. Colonial Williamsburg was the political, social and cultural capital of Britain's largest, wealthiest and most populous colony. Colonial Williamsburg encompasses more than 500 buildings and 90 acres of magnificent gardens. In the shops, taverns, government buildings, homes and streets, George Washington, Thomas Jefferson, Patrick Henry, George Mason and other Virginia patriots debated the ideas of liberty, independence, and personal freedoms that led to the founding of American democracy. Interact with costumed interpreters of varied age, race and social position as they provide a first-hand view of life when the town was the capital of Virginia colony. You will have some free time to browse through Merchants Square located adjacent to Colonial Williamsburg featuring an 18th-century style retail village and shops. Afterwards, you will depart for a spectacular buffet lunch included at Captain George's. Captain George's legendary buffet has been heralded up and down the East Coast as one of the best collections of fresh seafood and regional cuisine available. There is something for everyone! Following lunch, you will return to the hotel for a brief time to freshen up prior to the evening's festivities. Next, it's back to Colonial Williamsburg for the Grand Illumination. In the 18th century, illuminations were sometimes held to commemorate the birth of the reigning sovereign. Beautiful greenery and colorful bows adorn the streets of Colonial Williamsburg. The Grand Illumination is an adaptation of a common practice during the 18th century, when ordinary citizens celebrated extraordinary events, major military victories, the arrival of a new colonial governor or the birthday of a monarch by firing guns and using fireworks. The event signifies the onset of the holiday season with hundreds of candles lit simultaneously in the windows along with music, dance and merriment. The festivities are topped off by a magnificent fireworks' display that takes place simultaneously in three locations within the Historic Area. You will return to the hotel after the fireworks for dinner on your own at a nearby restaurant of your choice and expense.

Wake to a continental breakfast once again included at the hotel before you check out and depart for a guided house tour at Berkeley Plantation. Celebrate "Centuries of Christmas" at what was once home to William Henry Harrison (9th U.S. President) and Benjamin Harrison (23rd U.S. President). In 1691, Berkeley was purchased by Benjamin Harrison III who established the first commercial shipyard on the James River. Tobacco was shipped from the plantation to England and 18-gun battleships were built there for the Revolutionary Navy. This elegant 1726 mansion is beautifully decorated with fresh greenery from the gardens and costumed guides add a special touch with stories of Christmas at Berkeley and more through four centuries of history. Take time to stroll through the grounds at the conclusion of the guided tour. Afterwards, you will depart for home with a lunch stop at your expense on the way.

ALL WOLF'S TOURS - TIMES AND ITINERARY SUBJECT TO CHANGE***