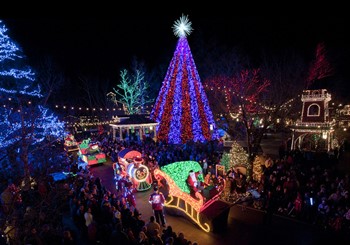 Christmas is right around the corner and what better way to usher in the holiday season than with a trip to the Live Music Show Capital of the World, Branson, for an outstanding variety of entertainment from heart-warming to high-energy and everything in between. There is something for everyone.

Christmas is right around the corner and what better way to usher in the holiday season than with a trip to the Live Music Show Capital of the World, Branson, for an outstanding variety of entertainment from heart-warming to high-energy and everything in between. There is something for everyone.

***ALL WOLF TOURS - Times and Itinerary are subject to change. ***

Christmas is right around the corner and what better way to usher in the holiday season than a trip to the Live Music Show Capital of the World, Branson, MO, for an outstanding variety of entertainment from heart-warming to high-energy and everything in between. There is something for everyone. Following meal and rest stops along the way, you first day's travel takes you as far as Indianapolis, Indiana for an overnight stay at the Drury Inn & Suites Indianapolis (317-849-8900). The hotel features an indoor/outdoor pool & whirlpool, 24-hour fitness center, guest laundry and 24-hour business center. In-room amenities include a mini refrigerator, microwave, iron/ironing board, hairdryer, flat screen TV and complimentary high-speed wireless internet. Dinner is on your own with the remainder of the evening to relax in your room or perhaps stretch out those stiff muscles in the fitness center or relax in the whirlpool.

Breakfast will be included at the hotel prior to check out and departure for Branson. Lunch is on your own while en route. Upon arrival in Branson, you will check in at the Grand Country Resort (417-335-3535) for the next 4 nights. The resort is located in the heart of the entertainment district and is a destination in itself with an indoor/outdoor water park, arcade, laser tag, 3 miniature golf courses, 4 dining experiences, shopping and live shows at the Grand Country Music Hall. The resort hotel's standard rooms feature two queen-size beds, microwave, refrigerator, coffee maker, hair dryer and iron/ironing board. Unpack and freshen up as you will waste no time enjoying the food and music of the resort starting this evening with dinner included at the Grand Country Buffet. You will enjoy the home-style food like grandma use to make at this on-site buffet restaurant. After dinner, you will not have to go far for a spectacular, award-winning show, the Grand Jubilee Evening Show is held right at the resort in the Grand Country Music Hall. Not only does this show feature the tight harmonies and dynamic performance of Branson's BEST Quartet, New South, plus the spectacular music, family comedy and Ozarks hospitality made famous by one of Branson's longest running shows. Heartwarming and joyous holiday classics are sprinkled in throughout the show to help you get in the Christmas spirit and start your visit to Branson off on the right note. At the conclusion of the performance, you can return to your rooms or enjoy the resort amenities before turning in.

A hearty breakfast buffet is included at the hotel before you take to the sidewalks of historic downtown Branson for the 90th Annual Veterans Day Parade. A memorable end to Branson's Veterans Home Coming Week, the Veterans Day Parade is one of the largest hometown parades in America honoring veterans and military personnel currently serving our country. Following the parade, you will have free time for lunch and browsing. Mid-afternoon you will depart for the Texas Tenors "Deep in the Heart of Christmas" show. From placing 4th in 2009 on "America's Got Talent" the Texas Tenors burst on the music scene and have sold hundreds of thousands of albums and have performed more than 1,300 concerts. "Deep in the Heart of Christmas" is designed to bring out the feeling of a traditional family Christmas with added visual elements and effects, singers, dancers and delightfully magical characters; there's no place like Branson for the holidays. Next, dinner is included at an area restaurant followed by your final performance of the day at the Mansion Theater featuring Gene Watson. One of the most masterful voices in country music, Gene lights up the stage with his talented vocals and warms your heart with sincerity and song. You will return to the hotel for the night after the performance.

Wake to a buffet breakfast once again included at the hotel. Your day begins with all new "All Christmas, All Brett Family" Christmas Show at the American Bandstand Theatre. Through world-class singing, dancing, comedy, musicianship and production you will feel the joy, the nostalgia, the fun and all of the best feelings of the season. See why their dreams of performing before live audiences have carried them across the globe to share their unique brand of family entertainment and has made them a must see when coming to Branson. Lunch is included at a local restaurant. The afternoon you will be entertained by a man with a charismatic and engaging stage presence, the incomparable Daniel O'Donnell. Relax and enjoy the performance featuring his iconic blend of traditional Irish ballads and country, followed Christmas classics along with countless other festive songs, dancing and live music. After the performance, dinner is included at an area restaurant. The evening concludes with a high-energy blast of joy, laughter and music coming your way with the Presleys' Country Jubilee Christmas Show. Herkimer and Cecil give audience the gift of laughter with their side-splitting comedy that will have you laughing out loud. Enjoy a mix of musical numbers from their regular season show topped off with your favorite Christmas music favorites and loads of festive, feel-good cheer that everyone needs. Following the show, you will return to the hotel for the night.

This morning, you will board the motorcoach and depart for an all-you-can-eat brunch at the Keeter Center at the College of the Ozarks. Also, known as Hard Work U, the College of the Ozarks is a Christian based college founded to offer continuing education to those who are found worthy, but suffering from the means ($) to obtain a college education. Instead of paying tuition, all full-time students are expected to work on campus to defray the cost of their education, thus staff at the Keeter Center are students of the College. Next, the 1960's come alive in this fun-filled, fast-paced, celebration of an entire decade of music that can simply be described as fun! fun! fun! The #1 Hits of the 60's show has a cast of singers, dancers and a live band that brings to life the memories of a country and time that knew no boundaries. The show is packed with one hit after another from Petula Clark, Ray Charles, Sonny & Cher and more. Feel free to dance in the aisles to the Twist, the Mashed Potato, the Locomotion …all the outrageous dance crazes! Dinner is included at an area restaurant followed by one last performance in Branson, CJ Newsome's Classic Country & Comedy Show with Comedian Terry Wayne Sanders. With talent that continues to fascinate and delight audiences with sultry vocals of classic Patsy Cline songs to the high-energy, foot-stomping arrangements of Dolly Parton, Johnny Cash and Garth Brooks, every well-known melody comes alive. Television's Hee-Haw star, Terry Wayne Sanders joins the show to tickle your funny bone with his slap-stick comedy skit that features the likes of Homer Lee, Barney Fife, Joan Rivers, Gramma Beulah and many more. But wait…there's more! You will have a private meet and greet after the show. You then return to the resort to rest up for your journey toward home tomorrow.

Breakfast will be included at the resort before you check out and board the motorcoach bound for Indianapolis, IN for an overnight stay. Following meal and rest stops along the way, you will arrive in Indianapolis for check-in at the Drury Inn & Suites Indianapolis (317-849-9000) which is the same hotel you stayed in on the way to Branson.

Breakfast is included at the hotel prior to departure for home. Meal and rest stops will be made along your journey back to Pennsylvania.