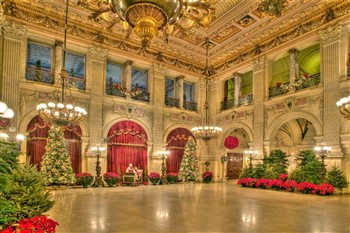 Amid its sandy beaches & amazing coastlines that offer unimaginable panoramic views, Newport, RI boasts an array of historic vacation retreats of the turn-of-the-century American aristocracy that are simply spectacular when dressed in Christmas finery & glowing with candlelight. Why not celebrate the lifestyles of the rich & famous with the Newport Mansions aglow during the Holiday season.

Amid its sandy beaches & amazing coastlines that offer unimaginable panoramic views, Newport, RI boasts an array of historic vacation retreats of the turn-of-the-century American aristocracy that are simply spectacular when dressed in Christmas finery & glowing with candlelight. Why not celebrate the lifestyles of the rich & famous with the Newport Mansions aglow during the Holiday season.

2 Nights' Lodging at the Newport Beach Hotel and Suites, 2 Breakfasts, 2 Dinners, Guided Driving Tour of Newport, Free Time in Downtown Newport, Tour of The Elms Mansion, Tour of the Breakers Mansion and Sparkling Lights at The Breakers, Tour of the Marble House Mansion, Baggage Handling and Transportation

The famous Newport mansions are elaborately decorated in their Yuletide finery and ready to welcome visitors for the Holiday Season. Following meal and rest stops enroute, you arrive in Newport, Rhode Island late afternoon at the Newport Beach Hotel and Suites (401-848-7128). Situated along the sandy beach, and with its meticulously restored gambrel-style historic hotel building and contemporary shingle addition, the seaside resort combines Newport's historic charm with contemporary sophistication. The hotel rooms feature complimentary wireless internet, in-room gourmet coffee and teas, refrigerator, microwave, iron/ironing board, hair dryer, and a DVD player with complimentary use of their in-house DVD library. The hotel amenities include an indoor pool and hot tub elevated over Newport Pond, fitness center, and business center. To the north, overlook the serene waters and natural habitat. To the south, take in the crashing of the waves and the Cliff Walk lined with mansions. Dinner this evening is included at a local restaurant followed by return to the hotel for the night.

Breakfast is included at the hotel this morning before you depart with your local guide to lead you on a narrated driving tour of Newport featuring Bellevue Avenue, which was the backbone of Newport's Golden Age. Here, the Vanderbilts and the top 400 of U.S. society and wealth congregated during the summer months. During the tour, you will stop at the Marble House where admission is included to explore the summer home of Mr. & Mrs. William K. Vanderbilt. Reportedly costing $11 million to build, it was considered the most lavish house in America in 1892. The walls of the bathroom are gilded with 22 carat gold and the floors are marble. During the holidays, its rooms are decked out with countless poinsettias, stunning evergreens, trees, wreaths, fresh flowers and period ornaments to turn the house into a Christmas wonderland. Next, you have time for lunch on your own and time to browse Newport's downtown shops. Afterwards, you depart for a self-guided tour of the Breakers Mansion. Home of President and Chairman of New York Central Railroad Cornelius Vanderbilt II, a 70-room, Italian Renaissance-style palazzo boasts a display of rich marbles, exquisite mosaic tile floors and ceilings, and topped off by panoramic ocean views. The focal point of The Breakers is The Great Hall. Stroll across the floor and gaze at the elaborate details from floor to ceiling. Lush greenery, vibrant poinsettias and meticulously decorated trees surround the room and accent the second floor balcony. Witness Sparkling Lights at The Breakers, a spectacular outdoor lights display that contains more than 40,000 twinkling lights that dress up the façade of the home and part of the serpentine walkway on the property. Your night concludes with dinner included at an area restaurant and return to the hotel to relax and unwind after a busy day of touring.

Following breakfast included at the hotel, you check out and finish your look back at the Christmas traditions of the rich and famed with a tour of The Elms. Each mansion has its own charm and pizzazz throughout the year, and holiday decorations heighten the experience. The Elms is an elegant French-style chateau built in 1901 by Philadelphia coal tycoon Edward J. Berwind. Among its elaborate holiday decorations, the Elms is most well-known for its poinsettia tree. Located in the ballroom, the white poinsettia tree contains 150-200 plants. The Elms was the first fully electrified house in Newport. Don't miss the opportunity to see how the "well-to-do" celebrated the Holidays. You may even wish to purchase a replica ornament to take home with you from the gift shops in memory of the fabulous holiday experience in Newport. You depart for home following the tour with meal and rest stops along the way.

**ALL WOLF'S TOURS - TIMES AND ITINERARY SUBJECT TO CHANGE**