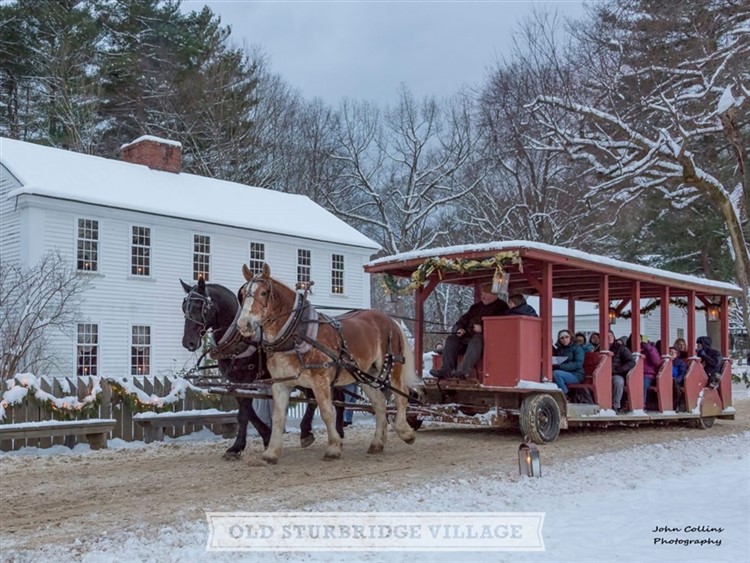 Feel like you stepped into a Norman Rockwell postcard with this heartwarming and joyous trip to the Berkshires. Enjoy Christmas by Candlelight at Old Sturbridge Village, Bright Nights drive-through lights display, Victorian Tea and tour at Ventfort Hall, visit the Norman Rockwell Museum and Vaillancourt Chalkware, drive by some of the Berkshire "Cottages" once home to American Aristocracy and more.

Feel like you stepped into a Norman Rockwell postcard with this heartwarming and joyous trip to the Berkshires. Enjoy Christmas by Candlelight at Old Sturbridge Village, Bright Nights drive-through lights display, Victorian Tea and tour at Ventfort Hall, visit the Norman Rockwell Museum and Vaillancourt Chalkware, drive by some of the Berkshire "Cottages" once home to American Aristocracy and more.

*** ALL WOLF’S TOURS - Times and Itinerary are Subject to Change ***

Feel like you have stepped into a Norman Rockwell picture postcard during this tour filled with heartwarming beauty and joyous experiences in the Berkshires and Old Sturbridge Village in Massachusetts. Following meal and rest stops enroute, you arrive in Sturbridge early evening for check in at your host hotel the Fairfield Inn & Suites by Marriott Great Barrington Lenox/Berkshires (413-644-3200) for a one-night stay. Hotel amenities include an indoor pool, fitness center and complimentary Wi-Fi. Guest rooms feature a mini refrigerator, microwave, hairdryer and iron/ironing board. Dinner is included tonight with the remainder of the night to relax and unwind.

Wake to an extended continental breakfast included at the hotel before you check out and depart with your local guide for a day of touring. Your day begins with a short driving tour of Stockbridge to witness what can only described as a "picture postcard" town and hear the amazing stories about its founders. See the former Norman Rockwell Museum at the Old Corner House, the famous Red Lion Inn one of the few American Inns that has operated continuously since before 1800, and more. Your exploration of the area continues with the Berkshire Cottage Tour during which you will hear stories about the area and explore the era of the "Gilded Age". Known as the "Inland Newport", the Berkshires was home to many of the rich and famous like George Westinghouse and Andrew Carnegie who were drawn to the area by the pristine air and beautiful vistas and built extravagant summer homes to flaunt their wealth. During your driving tour, witness some of the estates, also called cottages, that were built by others like Harley Proctor of Proctor and Gamble and the Vanderbilts. Next, you stop for a tour of the Mount, once home of Edith Wharton, the first woman to receive the Pulitzer Prize for her work the 1920 novel, "The Age of Innocence". The home will be beautifully adorned with holiday decorations and there will be time to visit the gift shop where many copies of Wharton's works can be purchased. Then, a Victorian Tea/Light Lunch is included at one of the most elaborate "cottages", Ventfort Hall. Following lunch, enjoy a guided tour of the home built in 1893 for George Hall and Sarah Spencer Morgan, sister of J.P. Morgan, and was featured in the movie "Cider House Rules". You continue with admission included at the Norman Rockwell Museum. The museum houses the world's largest and most significant collection of Rockwell's work, including 998 original paintings and drawings. Rockwell lived in Stockbridge for the last 25 years of his life. Early evening, you have admission included into the Bright Nights Holiday Light Display. Set in Springfield's historic 750-acre Forest Park, a perfect backdrop for the more than 500,000 twinkling lights. Springfield is well known as the birthplace of Dr. Suess books author, Theodor Seuss Geisel. Marvel at the dozens of whimsical holiday scenes along the 2 ½ mile drive that will bring out the youth in one and all. Finally, after a busy day you check in at your host hotel for the next two nights, the Publick House Historic Inn (508-347-3313). Your accommodations combine charming New England décor with modern in-room amenities including a refrigerator, cable television, wireless high speed internet, hairdryer and iron/ironing board. Dinner is included at the inn with the remainder of the night to rest.

Enjoy breakfast included at the Inn prior to boarding the motorcoach for travel to Vaillancourt Chalkware Studio. In 1984, when Judi Vaillancourt received a gift of three antique chocolate molds from her husband, neither of them would know what would have become of it. Judi adopted the Victorian art form of chalkware by pouring chalk into vintage confectionary molds and applying her fine-art skills into a collected three-dimensional canvas. Today, families around the world celebrate the tradition of Vaillancourt chalkware and ornaments, and you can too by purchasing a piece to add to your holiday decorating collection. Afterwards, lunch is included at a local inn before you are dropped off in Old Sturbridge Village to experience "Christmas By Candlelight", an afternoon/evening filled with New England holiday traditions, live musical performances, storytelling, sleigh rides, festive foods, a roaring bonfire and strolls around the decorated Village Common. Be sure to visit the North Pole Village where you can find Santa and his whimsical elves, Mrs. Claus' Bake shop, a magical talking Christmas tree and an expanded train display. The evening is capped off with a nightly tree lighting. It is like you have fallen asleep and wake up a character in a Norman Rockwell painting. Dinner tonight is on your own with time to enjoy the event or relax back at the Publick House Inn.

A delightful breakfast is included this morning before you pack up and depart for home with cherished memories of a one-of-a-kind holiday experience that you thought you could only see in a picture postcard, but you were actually a part of it!