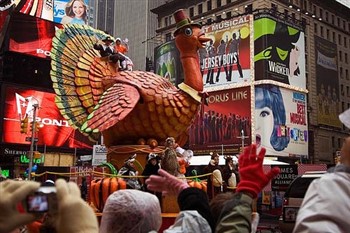 Don't sit at home and watch the parade, join Wolf's to witness huge balloons and festive music as the holiday spirit fills the air in New York City, the Macy's Thanksgiving Day Parade!

We will make a short stop on the way to New York at a fast-food restaurant for you to grab a quick breakfast and stretch your legs. Our next stop is the Big Apple. We will arrive in New York City approx. 11:30 a.m. (pending traffic) for lunch on your own and some free time. Check in time at the Skyline Hotel is approximately 3:30 p.m. Located at 725 10th Avenue and 49th Street (212-586-3400), the Skyline Hotel welcomes you to the famed Hell’s Kitchen neighborhood of New York City, best known for its worldly cuisine of Restaurant Row. Newly renovated, the hotel offers a heated indoor salt water pool located on the penthouse floor of the west wing, a spacious workout facility with state-of-the-art equipment, on-site restaurant and lounge, business center and complimentary internet access. In-room amenities feature mini refrigerator, iron/ironing board, and hair dryer. After check in, the evening is yours to explore the city that never sleeps….with so much to see and do, the possibilities are endless.

Since you are already in New York City, you may check out before the parade begins, or at least by 12:00 noon, and make your way to the viewing area of your choice for the Macy's Thanksgiving Parade. The parade starts at 77th Street and Central Park West at 9:00 a.m., and travels along Central Park West, turns at Columbus Circle onto Central Park South, then veers south onto 6th Avenue and continues down to 38th Street. Avoid watching from 6th Avenue between 34th-38th Street and Macy's Herald Square, the national television broadcast greatly limits your viewing space. If you're an early riser, then head up to Central Park West, starting at 6 a.m., you will see other early risers starting to camp out from 59th to 75th Streets. If you aren't that early of a riser, no worries, there are still plenty of spots along the route for you to pick from. The parade will last until approximately noon. You will have free time at the conclusion of the parade to have lunch on your own and do some shopping or sightseeing. We will depart the city at 3:30 p.m. for home. A dinner stop at your expense will be made on the way home.

Reserved seating for the parade is NOT available. If you would like to take a chair to sit on while waiting for the parade, you may store that under the motorcoach, but you will have to carry that with you for the remainder of the day.