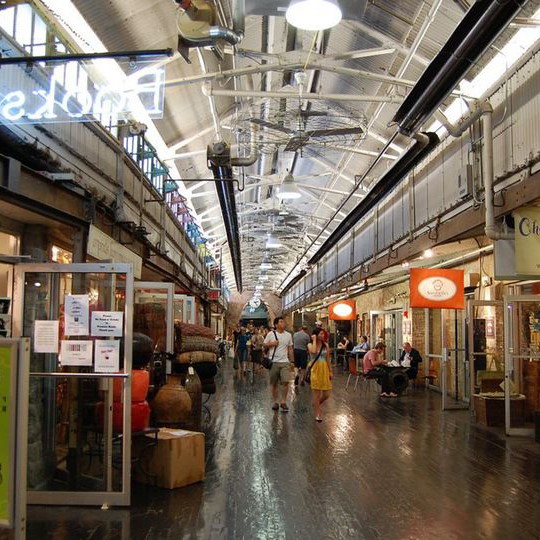 New York City is a melting pot of people and cultures. Join us as we stop in the neighborhoods of South Street Seaport, SoHo, the Lower East Side and Little Italy where you can drink in the culture and savor their unique flavors with time to browse, buy, and eat on your own.

Please Note:  There will be a good bit of walking as you will be dropped off in certain locations and given a specific amount of time to explore that area.

New York City is a melting pot of people and cultures. Visitors flock to "The Big Apple" for many different reasons, one of those being the plethora of flavors that New York offers to those looking for something different than the same old, same old they have at home. Today, we will visit South Street Seaport, SoHo, the Lower East Side and Little Italy to discover what these neighborhoods have to offer in the allotted time frame. Our guide will offer suggestions of notable places within the neighborhoods and then send you out to buy, eat, and browse on your own. Our first stop will be in the revitalized South Street Seaport. Devastated by Hurricane Sandy in 2012, the otherwise bustling South Street Seaport has rebranded itself to the Seaport District NYC and the identity change came with a slew of new dining options. Many of the dining options come with a view of the water's edge and the majestic Brooklyn Bridge. Others are tucked away and the typical visitor may not know that these hidden gems exist. Our guide will give you the time to walk around and discover on your own the tastes and sights of the Seaport District NYC (South Street Seaport). Next, we will board the motorcoach and take a drive to one of New York's most famous neighborhoods, SoHo. South of Houston (SoHo) emerged from industrial squalor back in the 70's and 80's to becoming a neighborhood filled with large flagship stores, high-priced lofts and the uneven cobblestone streets filled with enthusiastic shoppers and slow-moving tourists. One other thing has changed over the years, and that is the culinary landscape. SoHo has some of the most beloved eateries as well as a ton of newer spots that offer a fix for whatever you are craving. Our guide will set you free for a time to find your favorite flavors to either eat or bring home with you to share with stories of your visit. New York Cuisine is among the world's best, not to mention varied and international. Next, a trip to New York City would not be complete without a stop in the Lower East Side neighborhood where their Jewish heritage shines through with some of the best specialty food shops and ethnic eateries including the Pickle Guys, Kossar's Bialy and the Doughnut Plant. Pickle Guys owner Alan Kaufman rolls up his sleeves and works elbow-deep to produce the remarkably fresh stock from an old Eastern European recipe. Along with pickles, Alan has brought back old traditional items such as Pickled Watermelon, Pickled Pineapples and Russell Borscht. A short walk from The Pickle Guys is the oldest bialy bakery in the U.S., Kossar's Bialys. For 65 years Kossar's bakers have incorporated old-style care and craftsmanship in creating the finest tasting bialys, bulkas, pletzels and sesame sticks. One taste of these fine, baked fresh daily baked goods, and you will be hooked. If sweet treats are what you like, visit the Doughnut Plant where their passion is to create the best doughnuts in the world by handcrafting them daily in-house with the freshest all-natural ingredients inside and out. Our final stop of the day will be in New York's famed Little Italy. Once a bustling Italian immigrant community, Little Italy is now a major destination for those looking for authentic Italian cuisine. Walking beside the narrow, cobblestoned streets beneath the fire escapes of the turn-of-the-century tenements, you will be tempted by the sight, sounds and smells of Italian cuisine and culture emanating from the restaurants surrounding you at every step. Please have dinner before departing. We will make only a restroom stop along the way home.

ALL WOLF TOURS - TIMES AND ITINERARY ARE SUBJECT TO CHANGE ***