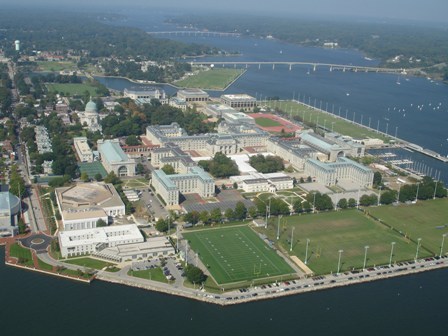 Join us for a "Coach & Stroll" tour of Maryland's capital city Annapolis featuring a narrated driving tour and guided walking tour of the Maryland State House. Enjoy free time to explore and shop downtown Annapolis followed by a fascinating harbor cruise along the shoreline of the United States Naval Academy grounds where John McCain was laid to rest.

***ALL WOLF’S TOURS – TIMES AND ITINERARY SUBJECT TO CHANGE***

Join us as we explore Maryland's state capital, Annapolis, by bus, on foot and by water. Originally called "Providence" when settled by the Puritans, the name was later changed to "Anne Arundel's Towne" after the wife of Lord Baltimore, and finally received the name as we know it when the capital was moved here from St. Mary's City. A thriving shipping industry brought great wealth to Annapolis, and prosperous merchants and "planters" sought to duplicate their amenities of their homeland in the colonies building mansions that rival any in England. Annapolis has more of these original 18th century structures standing than any other city in the U.S. We will pick-up a costumed guide who will enlighten us with more details of this harbor town and point out historic highlights throughout our narrated driving tour portion of our visit. Our first stop, however, will be at the Maryland State House for a guided walking tour of this truly historic landmark completed in 1779. Easily recognized by the unique wooden dome that towers above the city, the seat of Maryland government is the longest running capitol in the U.S. that is still open for legislative business and is also the only capitol building in the country that served as the capital of the United States. This is also where George Washington tendered his resignation as General of the Continental Army following the Revolutionary War. Marvel at the beautiful architecture and soak in the storied history during your visit. **Please note that a Government Issued Photo ID is required to access the State House and all persons will go through a security scan prior to entering the buildings hallways. Wolf's Bus Lines is not responsible if anyone forgets their ID or does not pass through the security scan. After our State House visit, we will take a narrated driving tour around the city with our period-dressed guide who will point out historic highlights throughout the city including the WWII Memorial. Next, we will be dropped off at City Dock to enjoy free time to have lunch on our own and time to shop or stroll the grounds of the United States Naval Academy. *Government Issued Photo ID is required to gain access to the USNA grounds. For those who may be interested in seeing the final resting place of John McCain, his grave is located at the USNA Cemetery amid hundreds of the nation's veterans. This is not included in the guided portion of the tour and is completely on your own should you wish to include it in your visit to Annapolis. Mid-afternoon, we will return to City Dock for a 40-minute narrated sightseeing cruise with spectacular views of the Annapolis Harbor and the banks of the US Naval Academy home of John McCain's final resting place. Hear about the Annapolis' integral role as an historic seaport and even catch a glimpse of the Chesapeake Bay Bridge. Once back on land, we will have more free time for dinner on our own before departing for home.